< Back to Physician’s Perspectives 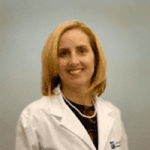 An Inpatient Telehealth Pioneer Since the Industry’s Early Days

“I’ve always wanted to do that new thing.”

It is how Dr. Dana Giarrizzi sums up her career so far. After getting her D.O. degree from the Philadelphia College of Osteopathic Medicine in 1996, she focused on emergency medicine, then moved into internal medicine and co-founded the first hospitalist program in her hometown area in Pennsylvania. Then in 2005, she started working in South Carolina as an Eagle hospitalist.

She attended an Eagle medical director summit where she saw her first telemedicine robot. It was love at first sight.at first sight.

“Telemedicine was not well-known at that time,” she says. “It was accepted only by forward-thinking people.”

One of those forward-thinking people was the founder. “He saw  telemedicine as the wave of the future and got on board pretty early. He took us to a hospital to see the telemedicine robot that he was incorporating into rural hospitals with staffing issues. I fell in love with it from the beginning. It touched my heart. I said, ‘I’m in.’”

She continued with Eagle as the company evolved into Eagle Telemedicine under the leadership of Dr. Talbot “Mac” McCormick. She helped get the company’s young inpatient telehealth program off the ground.

“At times I felt like I was in a jungle clearing a new trail with a machete,” she says. It was hard work, but she always knew how important it was to connect patients and doctors. That mission kept her going.

She helped develop the telemedicine portal that Eagle uses so its telemedicine teams can easily work within the variety of Electronic Medical Record (EMR) systems at the hospitals that partner with Eagle. She also helped lay the foundation for onboarding new Telehospitalists coming into the Eagle program. “We made it so much easier for the people coming behind us,” she says.

She recalls those early days when, as a mother with young children, she worked through the night to help underserved hospitals establish inpatient telehealth programs. “I met a lot of barriers and naysayers along the way,” she says.

She worked as an Eagle Telenocturnist for five or six years, before taking a break.

“I was getting older and just couldn’t do nights anymore, and that’s primarily how telemedicine was used in hospitals. Working nights just wasn’t in my DNA anymore. But, Dr. Mac and I have always had a mutual respect. We stayed in touch. I started to work with Eagle when opportunities opened up for daytime TeleHospitalist work.”

Today, from her home office in South Carolina just across the state line from Charlotte, North Carolina, she works as a TeleHospitalist with hospitals in Oregon, South Carolina and North Carolina. They range in size from small, critical access hospitals to larger facilities. She frequently covers weekends at the facilities, so onsite hospitalists working during the week can have time off.

Today she enjoys working at a time when virtual care has gained wider acceptance by hospital leaders, physicians and patients. She has watched as Eagle’s programs have expanded beyond TeleNocturnist care to include a range of specialties including Neurology, ICU care and infectious disease.

She finds that Eagle faces far fewer naysayers today because of the 12-year track record the company has built. “Now we can talk in terms of what we are actually doing for hospitals, not just what we CAN do.”

What else has changed? Telemedicine is now less cumbersome. She recalls a time when some patient records would be paper-based rather than electronic. “We’d have someone at the bedside open the patient’s chart. We zoomed in to read the chart, while the nurse fliped the page. We haven’t changed the way we practice, but as things developed we got better at accessing the information we need.”

Today, she sees the power of inpatient telehealth in treating infectious diseases. “We are saving physicians from getting sick. We are saving equipment and resources—I don’t need the gown or the mask or the gloves when I work from home. If you have something that is so contagious, why wouldn’t you have a telemedicine doctor be the one to go in and evaluate the patient? It could be any infectious disease—measles or the flu. We’re relieving some of the burden from the people who are onsite.”

Then she adds, “We are sharing the burden.” She lives by the Eagle philosophy that inpatient telemedicine was never meant to replace hands-on healthcare. “We’re not here to take over anything,” she says. “We are always going to be part of the solution, an adjunct or a tool in the healthcare tool belt.”

Today, her husband, a physician assistant, and her daughters—Isabella, 17; Olivia, 16; Sophia, 14; and Gabriella, 11— are proud of the work she does.

“Inpatient telemedicine is not going away,” she says. “Things took a step forward and they’re not going back.”