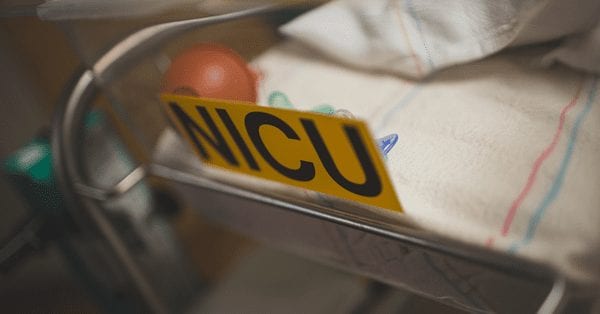 Tele-NICU provides a highly experienced neonatologist at a moment’s notice 24/7/365. Anywhere in the U.S., any rural or suburban hospital can have the expertise of a neonatologist who can “beam in” via a high-tech audio-visual cart.

Neonatal intensive care units (NICUs) generate considerable revenue for hospitals. But in small community hospitals, there often is no neonatologist to oversee a NICU. A high-risk infant typically requires transfer to a tertiary hospital — often quite a distance from home.

As a new mom, Eagle’s TeleHospitalist Dr. Rebecca Jentzen understands the stress relief a Tele-NICU service will provide for expectant mothers. “When I was pregnant, my mind thought of so many things that could go wrong,” she says. “It would give me great peace of mind that a specialist was available if something should happen, and especially that they’re available any time of the day or night.”

This shortage of neonatologists is even more acute than the shortage of pediatricians. And in a rural community, there is even less chance of recruiting a neonatologist as the patient load isn’t sufficient to support a private practice.

In response, many small-town NICUs have been able to shore up their neonatal services by taking advantage of neonatal nurse practitioners (NNPs).

However, there’s a catch — these NNPs must be paired with a physician credentialed in neonatology who oversees their work. Without that specialist, a community hospital simply can’t have a functioning Neonatal Intensive Care Unit. 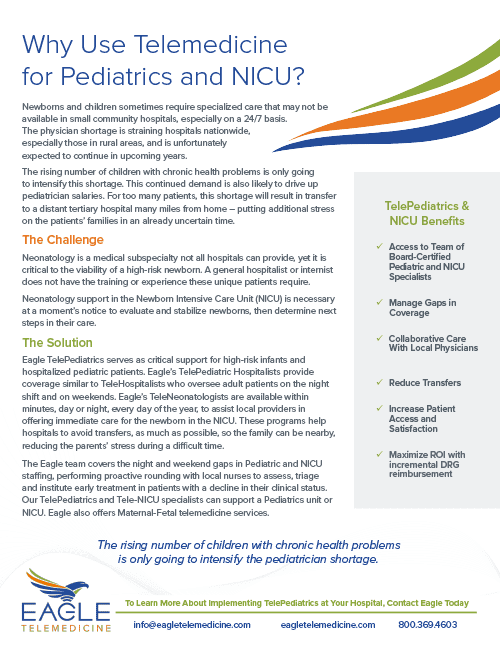 That’s Where Telemedicine is a Saving Grace

Just as if that TeleNeonatologist was in the room, they can interact in real time with the Nurse Practitioner and other on-site providers — assessing the NICU monitors and the newborn’s condition, with the on-site nurse holding the infant to provide complete visibility. From that full assessment, the Tele-NICU physician can guide on-site practitioners in next steps for that infant.

In many, many cases, the infant can be treated in the local hospital. And for those families, this releases the stress of transport to a tertiary hospital. There’s so much relief when dad doesn’t have to drive nearly two hours (each way) to see mother and child.

Let’s back up a bit to discuss this shortage of neonatologists, to understand the trend that is driving more hospitals toward telemedicine.

The shortage of neonatologists isn’t limited to rural communities. Cities and suburbs across the country have faced their own shortage of these physicians who care for critically ill and premature newborn infants.

In Memphis, TN, for example, the city’s hospitals faced a shortage of neonatologists. While the rate of premature births was falling, it was still above the national average — which increased the demand for neonatologists.

Worsening the problem, changes in neonatology residency programs and rotations had led to a situation where neonatologists in training were no longer able to solely provide the continuity of care that premature and ill infants need. In Memphis, hospitals also had a difficult time recruiting advanced nurse practitioners from outside the region.

The American Academy of Pediatrics explains this trend in a special report, Neonatal Provider Workforce.

“There appears to be a growing national workforce shortage of [neonatal nurse practitioners] and insufficient numbers of [physician assistants] and pediatric hospitalists practicing in neonatal intensive care to fill the gap, challenging many neonatal programs’ abilities to adequately staff their NICUs with providers,” writes lead author Erin L. Keels with the National Association of Neonatal Nurses,

Keels adds: “Care to high-risk infants by NNPs has been found to be safe, of high quality, and cost-effective. Accordingly, the role of the NNP in the care of high-risk neonatal patients has been endorsed by the AAP37 and in the Guidelines for Perinatal Care.”

Acute care-certified pediatric nurse practitioners can be used as NICU providers for term and older infants, such as those with surgical conditions and chronic medical conditions. Primary Care-Certified Pediatric Nurse Practitioners can perform well-newborn and other types of consultations, discharge education, care coordination, and neurodevelopmental follow-up.

“This team-based collaborative model capitalizes on the unique skill sets of each provider,” writes Keels.

Telemedicine programs may seem revolutionary. The concept of a physician “beaming” into a hospital room may seem like Star Trek Healthcare. You may wonder at the efficacy, when the physician is a face on a TV monitor.

That AAP report was written in 2019, in the pre-pandemic days when telemedicine was limited in hospitals. Much has changed in 2020, as the restrictions have been lifted. For good reason, as in case after case, hospitals and providers have witnessed the blessings that telemedicine brings to their patients.

The Centers for Medicare and Medicaid Services has also tracked this positive trend, and has announced that the lifted restrictions will stay in place.

This is the best possible news for small community hospitals. For optimum hospital care, at-risk newborns need specialist expertise. Many small hospitals have a general hospitalist or internist, but they lack the training or experience these infants require.

Even if a community hospital has a pediatric hospitalist, a family medicine specialist, or a medical pediatric hospitalist for daytime care of pediatric patients, it’s still not sufficient for a high-risk neonate. And any gaps in coverage — nights, weekends, holidays — leaves the hospital to rely on pricey locum tenens physicians. But the odds of getting a neonatologist at a moment’s notice, via locum tenens, are nearly impossible.

However, a local nurse assistant — trained in pediatric care — can work with a TeleNeonatologist, creating exactly the professional collaboration the AAP approves.

Tele-NICU is positioned to reduce the need for transfer, a top priority for families. With a highly experienced Tele-NICU specialist coordinating the neonate’s care, the hospital staff and family are assured the assessment and treatment will be optimal.

Given the digital technology available in today’s hospitals, Tele-NICU can streamline the complex aspects of treatment for high-risk infants. Just imagine the relief felt by newly expectant parents, knowing their baby will be in good hands — no matter when the birth occurs, day or night.

The chances are very good that their local doctors can keep the infant locally, instead of transferring to the big intimidating tertiary hospital many miles away. A high-risk birth is already stressful for parents, so there’s a true service when the community hospital can provide reassurance. Those parents will never forget it!

At Eagle, we believe Telemedicine is the great equalizer in healthcare.

The Lingering Effect of the COVID Pandemic on Healthcare Providers
June 21, 2022