ATLANTA (Sept. 24, 2019) — Eagle Telemedicine announced today that it has begun a TeleHospitalist and TeleNocturnist program at Jersey Community Hospital (JCH) in Jerseyville, Ill. The rural hospital about an hour north of St. Louis now joins the more than 150 hospitals nationwide that use Eagle’s TeleHospitalist and TeleSpecialty services.

“We are pleased to welcome JCH to the Eagle family,” said Talbot “Mac” McCormick, MD, president and CEO of Eagle Telemedicine. “JCH was at a turning point, the kind of thing a lot of hospitals face today. When the private physicians were in their offices seeing patients and a full load of work in front of them, calls from the hospital encountered constant interruption, delays, and disconnect in communication. JCH took a bold step to do something different.”

JCH had faced challenges like those of many rural hospitals. Licensed for under 50 beds, it was unable to sustain a full-time onsite telemedicine hospitalist services and was putting too great a strain on local physicians to share rounding and emergency calls, especially at night and on weekends. Patient retention was suffering. When its part-time hospitalist announced plans to begin semi-retirement, the hospital’s leadership knew it had to try a different approach, something that was a long-term solution. 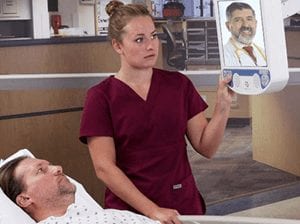 w with Eagle, JCH has implemented a model where onsite nurse practitioners (NPs) work collaboratively with Eagle telemedicine physicians, who provide support and guidance whenever they are needed.

“We have NPs who are the boots-on-the-ground on the medical floor,” said Michael McNear, M.D., JCH’s chief medical officer. “They are here seven days a week and are the touchpoint with the Eagle TeleHospitalists.” Now the facility is no longer struggling to compete for physicians with larger hospitals in St. Louis and has greatly eased the burden on primary care physicians practicing in Jerseyville.

Most of the TeleNocturnist hospitalist physicians on the Eagle TeleHospitalist team are in Kansas and are part of a Great Plains consortium founded to help rural hospitals in critical access areas solve staffing challenges.

Though it’s too early to have metrics showing the positive contribution of the Eagle program—it went live May 13—Dr. McNear says it’s clear the program has reduced the number of patients JCH was transferring to other hospitals.

“We had seen a general movement of more patients being transferred from our Emergency Room (ER) to other hospitals for several reasons, including the fact that our physicians just weren’t comfortable caring for a higher level of patients. With Eagle’s telemedicine physicians handling our admissions and our coverage, we have eliminated that. They are very experienced and comfortable with hospital medicine and caring for critically ill patients.”

Patients and staff have adapted well to the new program, according to Julie Smith, RN, JCH’s chief nursing officer. “After the announcement of the program at JCH, we had a lot of questions about rolling a computer robot into patient rooms,” she said. “But when the telemedicine physicians appeared on the monitor and talked with us, everyone was really impressed. When we finally went live, the patients were easily happy with the situation. There weren’t any naysayers left after the first week.”

Erin Kochan, population health director for JCH, had worked with Eagle at her previous position at HSHS St. Elizabeth’s Hospital in O’Fallon, Ill., which has a TeleStroke/TeleNeurology program managed by Eagle. She helped JCH make the initial connection with Eagle.

“Fifteen years ago, before I got into administration, I probably would have said that telemedicine will never work,” said Dr. McNear. “But over the last 10 years, you start to see the bigger picture. These kinds of programs absolutely can work. The main thing the patient wants is to be treated well and be listened to. Wherever that comes from, they’re going to be happy.”

In mid-2019, Dr. Brian Hunt made a call to a physician to discuss a patient at one of the hospitals where he serves as an Eagle TeleNocturnist. The physician, onsite at the hospital, asked him how his evening was going. “It’s one of the worst nights of my life,” said Dr. Hunt, who had just learned that his father had died unexpectedly. The physician immediately offered to cover the next night shift for Dr. Hunt.