Before the COVID-19 pandemic, a number of regulatory restrictions, like registration for DEA telemedicine numbers,  limited a physician’s ability to practice across state lines. Many of these, such as instate licensure requirements, were waived to combat the public health emergency (PHE) by the Centers for Medicare and Medicaid Services (CMS). While the CMS changes marked a significant step in helping telemedicine reach its full potential, telehealth physicians must still contend with other requirements, including registration with U.S. Drug Enforcement Administration (DEA) in all the states where they practice.

To prescribe a controlled substance before the pandemic, out-of-state physicians had to obtain DEA registration numbers for each state where they sought to practice. They also had to see a patient in person at least once to provide such medication. After the Department of Health and Human Services declared a PHE, the DEA changed its policy this March to allow prescription of controlled substances via the Internet, including through telemedicine, under just one DEA number—and without an in-person evaluation.

Why is rural hospital staffing so difficult?

Physician shortages impact hospitals and patients across the country, but rural hospital staffing is even more difficult.

These hospitals depend on general practitioners, like hospitalists and nocturnist, to fill the gaps in specialist coverage.

The relaxation of DEA requirements comes when rural and community hospitals are not only grappling with COVID-19, but also the ongoing national physician shortage and a lack of access to many medical specialists. Telehealth physicians could make great strides in addressing these coverage gaps for the future, but it’s important to remember the regulations are only waived for the duration of the PHE. In addition, varying requirements by states regarding prescription of controlled substances are still complicated, which calls for a more unified approach.

Regulation of internet prescriptions by the DEA is a result of the 2008 Ryan Haight Online Pharmacy Consumer Protection Act—an effort to curb internet pharmacies that were prescribing controlled substances like opioids, sometimes with deadly consequences. Ironically, the 2008 Ryan Haight Act did call for a “special registration to engage in the practice of telemedicine” that provided for seven ways to meet the initial in-person requirement via a virtual care platform, but the DEA never created such a special registration process.

Fast forward to 2020, with exponential growth and improvement in telemedicine technology and direct physician-to-patient practice models, and the Act’s requirements for an initial in-person visit and state-by-state registration still inhibit practice by sought-out medical specialists at rural and community hospitals. This includes telepsychiatrists who treat opioid addiction, as well as a range of other specialists who might be common in highly populated states like California and New York, but basically nonexistent in rural communities nationwide.

Outside of the pandemic, the requirement for physicians to have DEA registration in each state where they practice is costly. At a price tag of $731 per state for a three-year registration, costs quickly add up for physicians who want to practice and prescribe Schedules II through V of controlled substances in multiple states. The DEA registration cost further compounds the costs of holding individual licenses with state medical boards, which even through the Interstate Medical Licensing Compact (IMLC) range from $75 to $700 per state.

CMS Changes Could Save Rural Hospitals 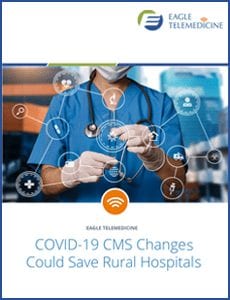 Telemedicine has been a silver lining during the coronavirus response. CMS telehealth rules changed dramatically compared to policies that governed these services in the past.

This crisis has presented a huge opportunity to help rural hospitals during this crisis, and perhaps in the future.

In response to the lack of progress by the DEA, Congress in 2018 passed The Special Registration for Telemedicine Act calling for the DEA to set ground rules for telehealth providers with a special registration to prescribe controlled substances by October 2019. Finally, in November 2019 the U.S. Justice Department announced plans to issue a proposed rule, but as of January 2020 when the PHE was called, no action had been taken.

While most states have chosen to bypass some telehealth requirements in the Ryan Haight Act as allowed during the pandemic, a special DEA registration number and process is a necessity for the long term to ensure rural and community hospitals can provide the best possible care. In January 2019, the American Telemedicine Association created five recommendations for  safely prescribing controlled substances:

For the future, the above recommendations related to DEA registration combined with continued relaxation of certain CMS requirements would allow the practice of telemedicine to flourish in the United States post-pandemic and bring more equitable care to underserved populations.

At Eagle, we believe Telemedicine is the great equalizer in healthcare.

The Lingering Effect of the COVID Pandemic on Healthcare Providers
June 21, 2022